Deprecated: implode(): Passing glue string after array is deprecated. Swap the parameters in /home/customer/www/old.tipponline.com/public_html/libraries/gantry/core/gantry.class.php on line 1044
 Beyond unemployment insurance: Six ideas to lift the economy 
Deprecated: Function create_function() is deprecated in /home/customer/www/old.tipponline.com/public_html/libraries/gantry/core/gantry.class.php on line 1043

Beyond unemployment insurance: Six ideas to lift the economy 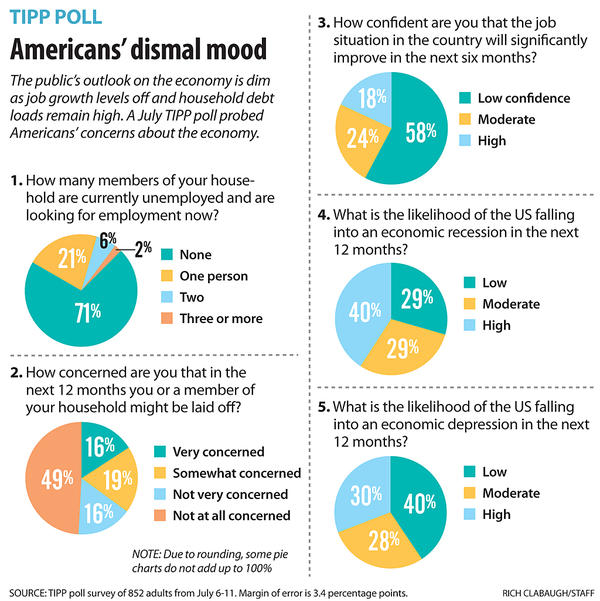 While Congress fights over extending unemployment insurance, Americans remain sour on the economy. But a few proposals show promise for encouraging growth.

The economy's slow patch has become a test of American confidence – and of whether policymakers can implement ideas to rev up job-creation engines beyond President Obama's exhortations to Congress to extend unemployment benefits.

Overall, Americans are still gloomy on the economy, according to a new TIPP poll of American adults. An index that measures economic mood fell in July for the second straight month and has been in pessimistic territory (below the 50 mark) for the year. Its July reading of 44.7 is well above its 2008 low of 37, but the index is at a new low since February 2009.

Three in 10 Americans have so little confidence in a recovery that they say an economic depression – not just recession – is likely within the next six months.

But is the negativism overblown? Whatever the answer is to that, does America need some new policies to get the economy moving faster?

The level of economic anxiety may be too high in one sense: The public has a much more pessimistic view than most professional forecasters, who don't see recession or depression ahead. To some extent, mood can become a factor driving real economic behavior – restraining spending and investment.

• The pace of a nascent jobs recovery has cooled in the past two months. Businesses are reluctant to hire until they see more consumer spending.

• Tax hikes (at least for affluent Americans) and regulatory changes loom on the horizon.

• Despite stimulus programs, per capita income remains below 2008 levels.

• The banking system is burdened by heavy losses on bad loans.

• Households are still loaded with high debt, and the federal government's debt load is rising fast.

All those factors explain why the economy isn't exactly roaring forward. And they explain why many economists and business managers call for new actions to coax job creation.

"No one has been given a compelling reason to take on more risk," says Don Charlton, who runs a Pittsburgh-area start-up that helps other businesses manage the hiring of new workers. Small businesses, he says, "can't commit to a new hire unless we really feel like the trend lines in the economy are going to allow us to pay that salary for quite a while."

In fact, business owners are adding their own dash of pessimism to the climate. A survey of small-business optimism, released July 13, showed a sizable decline in June as business owners fretted about a lack of sales growth and what they see as faltering federal policies.

"Confidence is lacking and the news out of Washington is discouraging," said economist William Dunkelberg of the National Federation of Independent Business, in reporting the group's survey. "Until this changes, don't expect small businesses to start hiring."

So the vital question has become what policymakers should do now. Much of the debate centers around government stimulus, and whether the need is for more federal spending (liberals say so) or less (conservatives say federal deficits are hurting confidence instead of helping). This week, Mr. Obama forcefully inserted himself into the congressional wrangle over extending unemployment benefits, which have remained stalled since they expired June 4.

Obama says that laid-off workers deserve "emergency relief to help them weather this economic storm." Republicans have countered that extending the benefits would be fiscally reckless, deepening the national debt.

In between those views lies a range of options. Many economists, including Federal Reserve Chairman Ben Bernanke, say the economy could be helped by setting policies to bring down future federal deficits. And more policymakers are starting to focus on what America should do for a long-term growth strategy, not just short-term recession-fighting maneuvers.

That doesn't mean it will be easy for policymakers to coalesce around new ideas. In Congress, and even within the Federal Reserve, opposing camps are pushing against each other. Here are some of the ideas being debated:

Support consumer demand. President Obama supports more aid to state governments to reduce layoffs and for the long-term unemployed. The idea is to offer assistance in tough times and to keep cash flowing to people who will spend it.

Incentivize hiring. Obama continues to sell the so-called HIRE tax credits for firms that employ people who lost jobs during the recession. Mr. Charlton in Pittsburgh, whose online business is called the Resumator, says more should be done along this line and to help start-up firms get seed money. (He hopes to hire a couple of people, but his young firm is in what he calls "survival mode.") Some economists have called for a payroll-tax holiday on new hires, or for tax breaks on business investment in equipment and research.

Tame the deficit. To some extent, this goal contradicts the first two. But many economists say the key is not so much to cut spending right now as to show commitment to bring long-term spending on health care and Social Security into line with taxpayers' ability to fund it.

Give clarity on taxes and regulation. The Business Roundtable and other groups say a major problem now is uncertainty about government policies. This can be hard to resolve at a time when policymakers are considering financial regulatory reform and policies on health care or energy. Tax hikes are also on the table as Obama considers his fiscal options, with deficits poised to persist through the decade.

"Expectations of higher taxes [may be] dampening the outlook" of consumers and employers, CitiGroup economist Steven Wieting wrote in a recent report. Policymakers "might have little ability to dampen such speculation, but, in our view, should try."

Have the Fed do more. The Federal Reserve could buy more securities (as it has already done with Treasury and mortgage bonds) to help provide monetary fuel for growth. Parallel to that, anything that helps banks get back to health and revive new lending could have the same effect. One modest move: Obama has proposed $30 billion in federal backing for new small-business loans.

Get a long-term growth strategy. This could include elements already mentioned, like tax reform and budget discipline. It also might include things like improvements in education, retraining, and promoting exports.

A mix of such strategies can help, economists say. But most forecasts call for low to moderate growth, not a rapid recovery of some 8 million lost jobs in the US.

Raghavan Mayur, president of Techno­Metrica Market Intelligence, which conducted the TIPP poll, says that so far "the political discourse does not ­really capture the intensity of the situation." He reckons that unemployment is much higher than the official rate of 9.5 percent, based on how many people in his poll say someone in their household is looking for work. Pessimism will decline, he says, when more jobs start to show up.