Roughly three out of four Americans under 65 expect to face Social Security benefit cuts upon retiring, but only 44% support reductions such as raising the retirement age, the latest IBD/TIPP poll found.

One reason for the gap may be widespread confusion about the Social Security Trust Fund. Among all ages, 57% said they were unsure how the trust fund was invested or that it was invested in a mix of Treasury bonds, stocks and corporate bonds, while 12% said Treasury bonds.

"If you believe the trust fund is real, then the timing for reform and the type of reform you favor is different than if you think the trust fund is essentially an accounting device," said American Enterprise Institute scholar Andrew Biggs.

Officially, the trust fund holds $2.6 trillion in special-issue Treasury bonds. In reality, it has no assets of any value to help the government afford the cost of benefits that has already overtaken the program's payroll-tax revenue.

The trust fund bonds are, in effect, IOUs from one branch of government — the Treasury — to another. In 2011, as the Social Security Administration cashes in a projected $45 billion in trust fund bonds to make up for a revenue shortfall, Treasury will have to borrow an additional $45 billion to redeem the bonds. 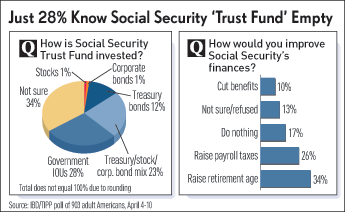 Under current law, Treasury would have to keep borrowing to finance Social Security benefits until 2037.

Senate Majority Leader Harry Reid, appearing on "Meet the Press" earlier this year, contended that Social Security "is fully funded for the next 40 years."

He added that the Social Security financing problem is "something that is perpetuated by people who don't like government."

Just 6% of respondents said Social Security has no financing issue, with 47% saying that the program has a financing "crisis" and 44% calling it a "problem."

Public perceptions that three-fourths of those who have yet to claim Social Security will face benefit cuts seem about right, Biggs says, noting that low-income workers and those nearing 62 may skirt reductions.

A payroll tax hike to fill Social Security's financing gap was backed by 26%, but only 15% of Republicans. Just 17% favor doing nothing to shore up the program.