With gas prices soaring to their highest levels since 2008, eroding take-home pay, optimism about the economy has dived to the lowest levels in nearly three years.

"The new kid on the block has been the higher gas prices," said Raghavan Mayur, president of TIPP, a unit of TechnoMetrica Market Intelligence, IBD's polling partner.

The Economic Optimism gauge had risen above 50 in January for the first time since September 2009 as the stock market climbed and the economy finally started adding jobs. But the gauge has plunged more than 20% in the past three months as gasoline prices spiked amid growing unrest in the Middle East and North Africa. 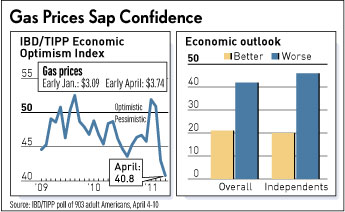 Pump prices averaged $3.770 per gallon of regular on Monday, up 6% from $3.554 a month ago, according to AAA. Prices are up 31% in the past year, and the IBD/TIPP poll found that consumers expect prices to reach $4.54 a gallon in the next three months.

Higher gasoline prices filter down to a broad array of consumer goods such as food and air travel. Mayur said 70% of people surveyed said they're being hurt by higher fuel prices, up from 67% in March.

That could put pressure on consumer spending, which accounts for 70% of economic activity. Retail and auto sales held up reasonably well through March. But perhaps for not much longer.

"The shock of the gasoline prices is going to suck up everything," Mayur said. "Over the next three months or so, you'll see palpable effects on consumer spending."

As a result, Mayur said recession risks have risen, though a renewed downturn is still unlikely. "I would expect a couple of more months of decline so that the entire spell plays out," he said.

Meanwhile, the National Federation of Independent Business' small-business optimism index fell 2.6 points to 91.9 in March, consistent with recession-level readings. Small-business owners were pessimistic on net about the outlook for the economy and profits. Yet hiring plans remain modestly positive.

In the IBD/TIPP poll, the gauge of confidence in federal economic policies sank 3.5 points to 35.5, the lowest since October 2008, shortly after the collapse of investment banking giant Lehman Bros. sent the economy into a tailspin.

"There is a feeling that the country is not heading in the right direction," Mayur said.