Deprecated: implode(): Passing glue string after array is deprecated. Swap the parameters in /home/customer/www/old.tipponline.com/public_html/libraries/gantry/core/gantry.class.php on line 1044
 Soak Rich, Bust The Budget 
Deprecated: Function create_function() is deprecated in /home/customer/www/old.tipponline.com/public_html/libraries/gantry/core/gantry.class.php on line 1043

Taxes: President Obama wants higher rates and fewer breaks, but only for the over-$250,000 set. That may or may not work politically, but as fiscal policy it's likely to make a bad situation worse.

There he goes again. Forced by resurgent Republicans last year to put his tax-hike plans on hold, Obama has returned to the charge. Last week he offered a soak-the-rich tax policy as a key part of his deficit-reduction plan. He would raise rates and cut credits and deductions, but only for the well-off.

In the past, this kind of talk has played well in the polls. But voters may be seeing through it now. In a new AP poll, 62% of the respondents said spending cuts were the way to cut the deficit, with only 20% favoring tax hikes. And in the latest IBD/TIPP Poll, 92% of Americans said cutting government spending is important.

Plus, the president faces some dissent in his own party. West Virginia Sen. Joe Manchin recently repeated his vow to oppose higher taxes on "American families and small businesses making $250,000."

So the political value of using the tax code for class warfare may be iffy at best.

The picture is much clearer on the fiscal front. As a way to reduce deficits, shifting tax burdens up the income scale fails to solve the problem and could well make it worse.

One reason for this is purely mathematical. The deficit is far larger than any revenues that could feasibly be squeezed out of the rich. 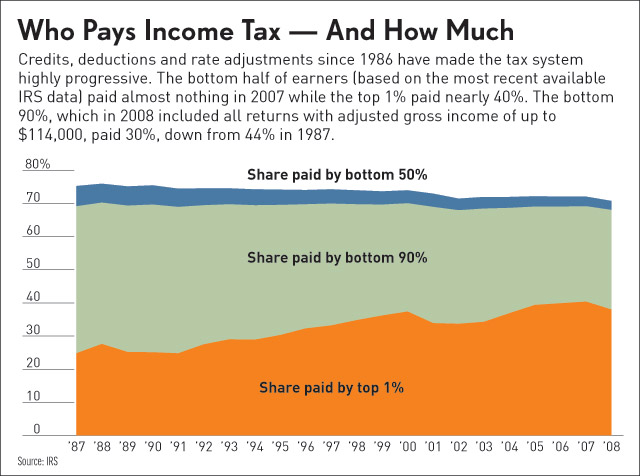 Over an adjusted gross income threshold of $200,000 — lower than the $250,000 that signifies "rich" to the Obama administration — total taxable income from all returns was $2.061 trillion in 2008 (the latest year available). This income generated $531 billion in taxes.

Let's say the top rate had been the Clinton era 39.6% instead of 35%, and the capital gains rate was back to 20%. That would have raised the 2008 tax yield by about $50 billion. Even assuming 2010 incomes are higher than in the recession year of 2008, these rate hikes don't add up to serious deficit relief.

Raising the top rate to 50% in 2008 would have added a total of $114 billion — still not impressive. And here we're getting into Fantasyland. Even the "People's Budget" of the Congressional Progressive Caucus would raise rates only to 45% for couples making $1 million and 49% for incomes of $1 billion and up.

The rich and their money are just too mobile these days. Peg the rate too high and they'll decamp to a tax-friendlier country.

Wouldn't even a little added revenues help? It would, but only if it didn't spur more spending. The trouble is that these revenues are likelier to be spent than saved.

This is the other reason taxing the rich doesn't work as a deficit solution. It's a fact of politics and human nature. When an overwhelming majority of people can get benefits paid by taxes on a small minority, those benefits look like the nearest thing to a free lunch. So why not increase them?

Voters might think differently about expanding government if they had to pay for that growth out of their own pockets, but most of them don't get such teachable moments from today's income tax system.

Since the last real reform in 1986 (see chart above), the tax system has been tweaked with credits, deductions and rate adjustments into a highly progressive structure.

As the tax system has grown more top-heavy, its revenues have also grown more volatile. The income-tax take spiked to an all-time high in 2000, hitting 10% of GDP for the first time ever. In 2010, it sank to 6.2%, its lowest level in more than 50 years.

Very high incomes are produced not so much by wages and salaries but by capital gains and bonuses, which rise and fall with booms and busts. In good years, the government gets a windfall and can't resist the urge to take on new spending commitments. In bad years, revenues collapse, but the spending can't be so easily rolled back.

We're not asking anyone to feel sorry for the rich. They're just not the answer to the deficit crisis. What will work — and it will take time — is slowing the growth of entitlements, especially Medicare.

That's the reality, even if the president would rather talk about something else.