Consumer prices rose 0.5% last month on soaring food and gasoline prices, matching February's gain, which was the biggest in 2 1/2 years. On an annual basis, inflation hit 2.7%, the highest since December 2009.

With nominal weekly wages flat, inflation-adjusted pay fell 0.5%. Real wages fell 0.4% vs. a year earlier, the first drop in 12 months, after a 2.2% gain as recently as October.

Though hiring is picking up, real wages have fallen at a 3.8% annual rate over the past five months. That's the fastest such decline since July 2008, when oil peaked above $147 a barrel and the U.S. was in a recession.

"If we don't get some relief in gas and energy ... then the consumer is going to have a major pullback," said PNC Financial chief economist Stuart Hoffman. 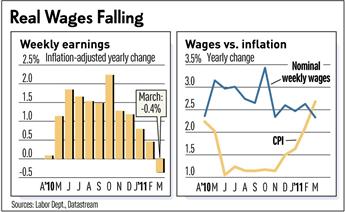 Economists have been slashing their Q1 economic growth targets. "We'll be lucky to see 2%," Hoffman said. That's down sharply from Q4's 3.1% pace.

"Consumers are being squeezed quite seriously by the fact that wages have not kept up with prices," said Nigel Gault, U.S. research director at IHS Global Insight.

Higher inflation is the main factor. But nominal year-over-year wage gains cooled from 3.4% in October to 2.3% in March.

The IBD/TIPP Economic Optimism Index dived to a 33-month low in April, though the Reuters/University of Michigan sentiment gauge edged up.

Consumers would be worse off had Congress not passed a 1-year payroll tax cut starting Jan. 1.

But most companies are having difficulty passing higher costs on to cash-strapped consumers.

Core consumer prices, which exclude food and energy, edged up just 0.1%. Compared with a year ago, they rose 1.2%, the most in more than a year but below the Fed's unofficial 2% target.

Automakers and airlines were among the few able to boost prices in March. Apparel prices fell 0.5%, though they are expected to rise later in the year.