Who's to blame for near-record gasoline prices? According to a new IBD/TIPP poll, it's oil companies and speculators.

That could be good news for President Obama and his Democratic colleagues — who've been attacking both — and bad news for Republicans hoping to expand domestic oil exploration and drilling. Whether the public is casting blame in the right direction is another question.

The IBD/TIPP poll found that 53% listed either oil companies (32%) or speculators (21%) as being most responsible for high prices. In contrast, just 19% blamed "no-drill policies" and only 9% listed the weak dollar. 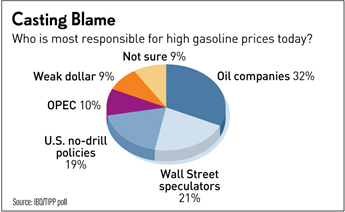 The survey also found that most believe gas prices will continue to rise, with two-thirds saying they expect prices to top $4.50 a gallon within three months.

(Since the May 1-6 poll, gas prices have ticked down after flirting with $4 a gallon. Crude and gasoline futures have fallen sharply, suggesting further relief at the pump in the coming weeks.)

While Republicans blame high prices on long-standing restric tions on domestic oil production, Obama has highlighted speculators. In April, he said that "there's enough oil out there for world demand" but that speculators "bet that oil is going to go up real high. And that spikes up prices."

At the same time, Democrats and some Republicans have cast aspersions on oil companies, complaining about high profits and taxpayer subsidies. Democrats are pushing to boost taxes on Big Oil by more than $20 billion over the next decade.

"The U.S. government has given these companies billions of dollars in corporate welfare every year," said Senate Majority Leader Harry Reid, D-Nev.

But higher industry taxes could "have the effect of decreasing exploration, development, and production, while increasing prices and increasing the nation's foreign oil dependence," a Congressional Research Service report said.

Economists point out that oil is a global commodity produced by a multitude of competing companies. Multiple probes by the Federal Trade Commission and other agencies have consistently failed to find any evidence of fraud or manipulation.

Obama and other Democrats have pooh-poohed the idea of more drilling. First, new leases would take years to result in new oil, they say. Second, they argue that oil companies are sitting on existing leases, with some hinting that companies are deliberately sitting on proven reserves.