Deprecated: implode(): Passing glue string after array is deprecated. Swap the parameters in /home/customer/www/old.tipponline.com/public_html/libraries/gantry/core/gantry.class.php on line 1044
 Americans Have Hit The Ceiling Over Debt 
Deprecated: Function create_function() is deprecated in /home/customer/www/old.tipponline.com/public_html/libraries/gantry/core/gantry.class.php on line 1043

Americans Have Hit The Ceiling Over Debt

Fed Chairman Bernanke warned on Thursday of "extremely dire consequences" if Congress did not raise the debt ceiling by Monday, and claimed "using the debt limit as a bargaining chip" to reduce government spending "is quite risky."

In the same alarmist vein, Treasury Secretary Geithner used the release of the Social Security and Medicare Trustee reports Friday to warn Congress "to move as quickly as possible, so that all Americans will remain confident that the United States will meet all of its obligations," including "our commitments to our seniors."

But the latest IBD/TIPP Poll finds Americans have hit a ceiling of their own, this one on patience with a government that's run up an inconceivable $14.3 trillion debt. They want spending restraint.

Asked to what extent they support or oppose legislation raising the debt ceiling, 40% of 917 adults surveyed May 1 to 6 were strongly against increasing the debt limit, while another 23% opposed it somewhat. Only 18% said they "support somewhat" raising the ceiling, while just 10% strongly support doing so.

Even "if Congress promises not to increase federal government spending as a precondition," anti-debt increase fervor remained. Some 51% were still opposed to raising the debt ceiling — including 30% strongly opposed. Only 40% supporting raising the limit, including just 13% strongly in support. 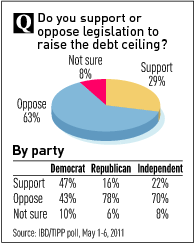 Most of those polled see through Bernanke's and Geithner's hysterics. As Sen. Pat Toomey, R-Pa., told MSNBC on Wednesday, "If we were never to raise the debt limit at all, the Treasury would still take in 70% of all the money they planned to spend in the form of tax revenue," which is "more than 10 times the revenue needed to avoid a default."

Toomey explained that while a partial government shutdown would occur if the debt ceiling were not raised, the catastrophe of a default wouldn't take place.
mp3Subscribe to the IBD Editorials Podcast

The Medicare and Social Security Trustee reports warn that both entitlement programs will go broke much sooner than expected. Meanwhile, the Congressional Budget Office reported that — oops! — its baseline forecast of $5.6 trillion surplus for 2002 to 2011 was off a tad — $11.8 trillion to be exact.

America is headed at warp speed toward a fiscal supernova. Instead of spreading disinformation about the debt ceiling, the White House should use its ongoing budget negotiations with Congress to save us from the real economic danger that's just around the corner.