Deprecated: implode(): Passing glue string after array is deprecated. Swap the parameters in /home/customer/www/old.tipponline.com/public_html/libraries/gantry/core/gantry.class.php on line 1044
 Fudging The Jobs Data 
Deprecated: Function create_function() is deprecated in /home/customer/www/old.tipponline.com/public_html/libraries/gantry/core/gantry.class.php on line 1043

Economy: When President Obama claimed he created 2.1 million private-sector jobs, the first transcript had the audience responding with "laughter." That's since been changed to "applause," but the joke's on us in any case.

In Obama's speech at a DNC event Monday, he bragged that "over the last 15 months we've created over 2.1 million private-sector jobs." Apparently, according to the revised transcript, the audience applauded. Instead, they should have booed him off the stage.

Sure, 2.1 million jobs sounds like a lot. But you don't have to look very hard to see that it's definitely not something to boast about.

For starters, the number of private-sector jobs is still down by more than 2 million since Obama took office.

In fact, he gets to his 2.1 million growth figure only by starting his count in February 2010, when the employment figure bottomed out, conveniently ignoring the 4- million-plus jobs lost during his first year in office.

Worse, over those same 15 months the working-age population grew by 2.3 million, which means that we've actually lost ground on the jobs front.

Worse still, at this pace we'll never close the enormous gap between jobs and population growth that opened up after the recession started in late 2007. (See chart.) According to the liberal Economic Policy Institute, we'd need 11 million more jobs today just to get us back on track.

No matter how you slice it, the jobs picture has gotten bleaker — not better — since Obama took office.

The number of long-term unemployed has climbed by a shocking 3.5 million, and the average length of unemployment has doubled. The share of eligible workers participating in the economy is down, and the number of those who've given up looking for a job is up.

If anything, we're in a full-blown jobs crisis.

But Obama is so desperate to find a way to put a positive spin on the economy that he has little choice other than to vigorously massage the numbers — when he's not making bogus claims about how bad things were when he took office.

In that same speech, Obama claimed that "immediately after being elected, I had to take a series of very difficult steps to rescue ourselves from the brink." It's a standard White House talking point these days: Obama saved the economy from a second Great Depression.

But as IBD showed in a National Issue feature earlier this week, the facts simply don't support that claim. The economy had bottomed out before Obama took office, thanks to the policies of his predecessor. And the recession ended five months after he took office — when only a tiny fraction of his $830 billion stimulus had made it into the economy. 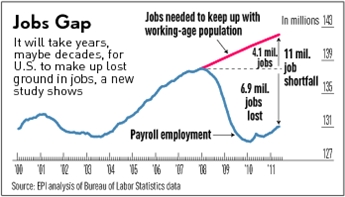 Indeed, rather than rescue the economy, Obama's big-spending, business-bashing, regulatory-advancing, union-friendly policies over the past 2 1/2 years have turned what should have been a normal recovery — with big gains in GDP and rapid job growth — into an endless slog.

Obama says he's "extraordinarily proud of the economic record that we were able to produce over the first 2 1/2 years."

But while Democrats might buy this, the public at large doesn't. Just 31% rated Obama's performance on the economy as "excellent or good," and even fewer — 27% — gave him top marks for his performance in "creating jobs and economic growth," according to the latest IBD/TIPP Poll. Other surveys have found similar attitudes.

Why should the public feel any differently? They expect — and deserve — results, while all Obama has to offer are excuses and phony statistics.