Deprecated: implode(): Passing glue string after array is deprecated. Swap the parameters in /home/customer/www/old.tipponline.com/public_html/libraries/gantry/core/gantry.class.php on line 1044
 50% Of Those Who Know Ryan Medicare Plan Like It 
Deprecated: Function create_function() is deprecated in /home/customer/www/old.tipponline.com/public_html/libraries/gantry/core/gantry.class.php on line 1043

50% Of Those Who Know Ryan Medicare Plan Like It

Earlier this month, a CNN poll found that just 35% supported Rep. Paul Ryan's reform plan for Medicare. The survey, in line with other polls, suggests that that the public has soundly rejected Ryan's proposal just two months after he unveiled it. But few of those surveyed know much, if anything, about it.

A new IBD/TIPP Poll finds, in fact, that only 38% report having read or heard "some or a lot" about the Ryan plan. Just 16% say they've heard a lot of about it.

Among those who know a lot about the reform, 50% are supportive, but Ryan has a lot more explaining and convincing to do.

Ryan's plan would transform Medicare from one that pays doctors and hospitals directly to treat retirees, to one where the government would, starting in 2022, let new retirees choose from a menu of private health plans, with the government picking up most of the premium. The idea, which has a bipartisan pedigree, is called "premium support."

"If a poll presents a simplistic description of the plan and immediately asks questions about it, at best, the pollster would be collecting a knee-jerk response to an oversimplified description," said Raghavan Mayur, president of TechnoMetrica Market Intelligence, which runs the TIPP poll. 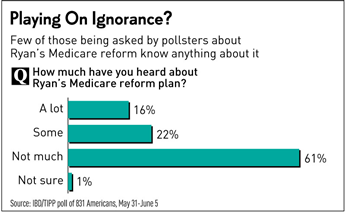 President Obama has chimed in, saying under Ryan's reform, "if insurance companies don't sell a policy that covers your illnesses, you're out of luck."

These and other claims have repeatedly been labeled as misleading or outright false by independent groups such as Politifact.com and FactCheck.org.

The IBD/TIPP poll found that, among those who know about the Ryan plan, 68% agree that opponents are "trying to mislead and scare seniors." (Even 49% of Democrats agree.) And 54% of this group say media coverage has not been "fair and objective."

"It's very difficult to have a real debate with all this misinformation," said David Certner, legislative policy director of AARP, which is not supportive of Ryan's Medicare reform.

But Democrats saw the benefits of such scare tactics with Kathy Hochul's late May victory in a normally safe GOP Republican House district in New York. She made Medicare a centerpiece of her campaign, saying Ryan would "decimate" the program.

So what do those who know something about Ryan's plan think about it? To find out, IBD/TIPP posed follow-up questions to this group. In general, they are more supportive:

• 50% of this group have a favorable view of Ryan's plan (40% of seniors also have a positive view).

• 53% think it will give seniors more choices.

Among those aged 25-64, support for Ryan's approach to Medicare — as opposed to the current structure — is 50% or above. (Under Ryan's plan, nothing about Medicare would change for those who are 55 or older today.)

But Ryan still has a lot of selling to do, the survey showed.

For example, only 43% of those who know about Ryan's plan believe it will save money by creating more competition in the health care system. Just 44% say it will put Medicare on a sustainable path, while 60% say it will boost seniors' out of pocket costs. And 51% of this group prefer Medicare as it is.

"The public has consistently said that they like Medicare and they don't want it cut," said AARP's Certner.