It's been a hot summer in Washington, D.C., but the forecast for President Obama and Democrats is dark, overcast and chilly , according to July's IBD/TIPP poll.

Only 43% of likely voters say they want the Democrats to retain control of Congress after November's midterm elections, while 48% favor a Republican takeover. Independents, the swing voters that decide elections, are even more eager for change: They prefer GOP control by a 52%-31% margin.

"The independents and moderates who are disaffected tend to see the GOP in a more favorable light," said Raghavan Mayur, president of TechnoMetrica Market Intelligence, which did the poll.

There's also strong evidence of a partisan "enthusiasm gap." Among registered voters, 65% of Republicans and 55% of independents say they are extremely interested in the upcoming elections. Just 48% of Democrats are.

Eighty percent of Democratic voters say they are very likely to vote in the fall vs. 89% of GOP voters.

The IBD/TIPP Presidential Leadership Index fell to 48.3, down 4.4 points from the start of the year and Obama's lowest rating yet.

Just 37% of Americans rate his handling of the presidency as good or excellent, while 39% rate it as poor or unacceptable.

Those people would like to see things get better. Just 35.8% are positive about the country's direction, a 4-point drop from January.

Simply put, the shine has completely come off the new administration. Furthermore, with each passing month, voters are less and less convinced by efforts to present any problem as the fault of the Bush administration.

As bad as the latest numbers are, they could still get worse.

"Obama has not hit any floor (in support) and there is still danger of further sliding. The key here is jobs and the economy," Mayur said.

Gridlock in Congress, massive deficits, an unpopular health care law, the BP (BP) oil spill response and the immigration debate have taken their toll. But most polls indicate that it is the economy putting voters in a sour mood.

Fifty-three percent of Republicans and 41% of independents see a high risk of another recession over the next year. About a quarter of both groups say it's very likely.

The National Journal's Charlie Cook recently predicted that the GOP would win back the House in this fall's election.

Karlyn Bowman, polling analyst for the conservative American Enterprise Institute, doesn't go that far, but she agrees that the environment is growing increasingly hostile for Obama and his party.

"These numbers just confirm what we are seeing in so many other polls. This is a president really in trouble," she said. "Particularly noteworthy is the reaction of independents being more pessimistic (than others) in every case."

Only still-strong support from his own party prevents Obama's numbers from collapsing.

For example, 52% of Americans rate Obama's handling of the BP spill as poor or unacceptable vs. 23% who say he's doing a good or excellent job. Independents are even more negative: 57%-18%.

When it comes to handling the overall economy, 33% rate Obama positively vs. 41% negatively. Among independents, 27% are positive and 44% negative.

This masks the intensity of the opposition to Obama and his allies. Independents who strongly disapprove of him on these and other key issues outnumber his strong supporters by 4-to-1 or even 6-to-1.

The mood of the country has shifted rightward too. A plurality (40%) of respondents described themselves as conservative, about a third (32%) as moderate and only 26% as liberal.

Most view Obama as in the latter camp. A total of 61% described Obama as liberal vs. 22% for moderate and 13% for conservative.

The poll of 852 Americans was conducted July 6-11. It has a margin of error of 3.4 percentage points. 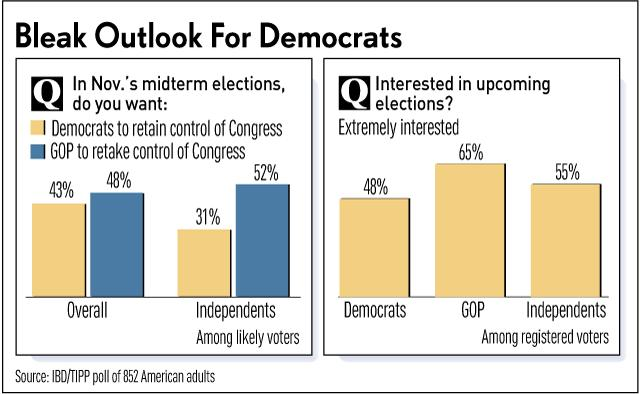