Democratic voters are finally coming home — but are getting trampled by independents who have decided to move out of the house that Barack Obama built, according to October's IBD/TIPP poll.
After months of stories suggesting a GOP wave in November, Democrats are now shaking off their torpor and rallying behind the president and his allies in Congress, the survey found. But independents who joined them to elect Obama in 2008 have soured on Democratic leaders and their policies.

Likely voters favor a GOP Congress over a Democratic majority by 48%-43%, the poll found. Self-described independents would prefer Republican rule by 55%-31%.

"Independents don't believe that the country is pointed in the right direction. They see the November election as an opportunity to remedy the situation," said Raghavan Mayur, president of TechnoMetrica Market Intelligence, which conducted the poll. "Ideologically most independents — 58% — find themselves to the right of Obama." 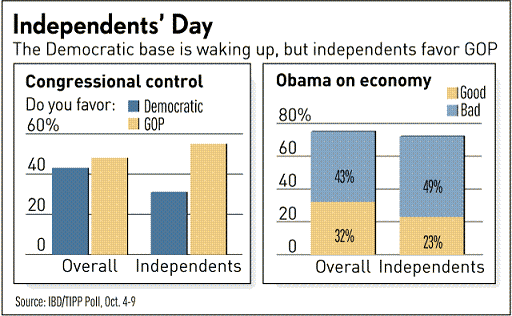 Obama's support among Democrats perked up to 81.5 from 77.4. But his approval among independents dived 6.3 points to 39.8, his first sub-40 score for this group.

Just 31% of Americans believe he is providing strong leadership and only 7% say it's "very strong." Another 36% call his leadership weak, with 18% saying it's "very weak." Meanwhile, 22% of independents see Obama as a strong leader vs. 40% who say he's weak.

Democrats also persist in a rosy view that independents just aren't seeing, with joblessness at 9.6%. While only 12% of Democrats give Obama a D or F grade on the economy, 49% of independents do.

Beneath Democrats' support for Obama's policies, they are gloomy about the future too: 68% said the American dream would be harder for their children to achieve. That compares with 88% of Republicans and 86% of independents.

Deficit fears are widespread too: 95% of Republicans say they are highly concerned vs. 82% of independents and 69% of Democrats.

ObamaCare remains divisive: 42% want it repealed, 32% want it expanded and 16% want it left as is.

Just 26% of independents want it expanded vs. 46% repealed.