Barack Obama vowed in 2008 to bring the country back into the international community, but Americans are starting to worry that it is instead once again becoming the "pitiful giant" it was in the 1970s.

A new IBD/TIPP poll finds Americans continuing to sour on Barack Obama and becoming increasingly fearful that his handling of the WikiLeaks scandal and other international crises is dragging the country down before the rest of the world.

The IBD/TIPP Presidential Leadership Index fell 2.1 points in December to 45.5, Obama's lowest mark yet. Readings below 50 signal disapproval. The poll also found that Americans disapprove of his job performance by 50%-41%.

The latest slide is triggered by the White House's handling of WikiLeaks, argues Raghavan Mayur, president of TechnoMetrica Market Intelligence, which conducted the poll. The dumps of once-secret documents have aggravated already-growing fears that America is perceived as a faltering world leader. 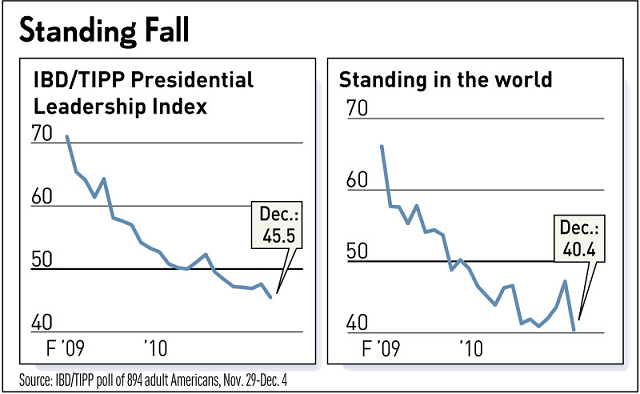 A bare majority, 52%, feel Obama has done nothing to improve America's image while a third, 32%, feel the self-proclaimed "citizen of the world" has actually hurt it. Just 13% think he has made it better.

The IBD/TIPP reading for standing in the world plunged 14.4% to 40.4. That's "a new low for the past 26 months since President Obama was elected to office. The index has dropped 38% overall since November 2008," Mayur said. He added: "The drop is driven by sharp erosion of 11 points on this index among Republicans who are traditionally hawkish on foreign affairs."

"It's just a general dissatisfaction with the way things are going," she said. "Negative perceptions of the economy have a way of bleeding into everything else."

Either way, the decline was a bitter pill for a president who campaigned on healing rifts between the U.S. and the rest of the world. That included a major speech in Berlin on July 2008, an unprecedented act for someone who was still just a candidate.

"The greatest danger of all is to allow new walls to divide us from one another," he said at the time.

At first, his overtures seemed to be reciprocated — at least as far as Obama himself was concerned. He won the Nobel Peace Prize in 2009, having been in office for just days before being nominated.

Since then, though, the U.S. has met with repeated rebuffs overseas. It lost the 2016 Olympics to Brazil despite Obama's direct lobbying to have it in Chicago. An international climate summit in Copenhagen last December provided no breakthrough.

More recently, Obama's efforts to get G-20 nations to adopt measures to end currency wars and promote sustainable growth were rejected, with longtime ally Germany joining China in harshly criticizing U.S. monetary policy. Nor has the administration been able to convince China to rein in North Korea, which has staged a series of provocative and deadly military actions vs. South Korea. Nor has a troop surge in Afghanistan provided much stability there.

All of that may pale before the WikiLeaks dump, which made the world privy to U.S. diplomats' frank assessments of foreign leaders and their agendas. The administration has sought to downplay the scandal, but critics fear it may poison U.S. efforts at diplomacy.

The public's grumpiness is not helped by bad economic news. The unemployment rate rose to 9.8% in November. Just 39,000 jobs were created, not enough to keep pace with the population.

The IBD poll found that 61% were not satisfied with current economic policies, with 31% not at all satisfied.