Deprecated: implode(): Passing glue string after array is deprecated. Swap the parameters in /home/customer/www/old.tipponline.com/public_html/libraries/gantry/core/gantry.class.php on line 1044
 Obama Gets Failing Marks, Especially From Independents 
Deprecated: Function create_function() is deprecated in /home/customer/www/old.tipponline.com/public_html/libraries/gantry/core/gantry.class.php on line 1043

Five months after an election that he called a shellacking, President Obama has done little to improve his standing with independents. Economic uncertainty still weighs on them, and few see Obama doing much in that area.

The newest IBD/TIPP poll put Obama's job approval rating at just 44%, with 48% disapproving. In November, his approval-disapproval was 42%-45%. The bump in support he enjoyed to start the year has largely eroded.

Jennifer Duffy, senior editor for the Cook Political Report, noted that until recently Obama was not "upside down" in most polls. But that is changing as moderates sour.

"These are the voters that are going to make or break his re-election," Duffy said.

"It's Americans' waning confidence with the economy," said Raghavan Mayur, president of Technometrica Market Intelligence, which conducted the April 4-10 poll of 903 Americans.

Other surveys also have found the public disgruntled. The Rasmussen tracking poll puts Obama's approval-disapproval at 44%-55%, with a record-low 19% strongly supporting him. 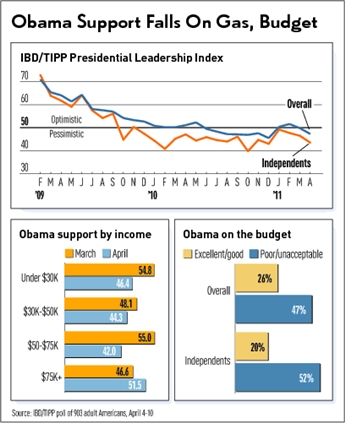 While hiring has slowly improved, wages are failing to keep up with expenses. Gas prices now average $3.77 a gallon, up 22 cents in a month. That is dragging Obama down.

By a 44%-32% margin, Americans give Obama failing marks for how he has handled the economy. Among independents, the margin is even wider: 44%-24%.

The IBD/TIPP Presidential Leadership Index fell to 47.3 in April from 49.8 in March. Readings below 50 signal disapproval.

Obama's seemingly aloof style — he intervened in the recent federal budget dispute only when it seemed near a shutdown — does not seem to have reassured many.

The administration is reportedly worried that the economy will damage Obama's re-election chances. The AP reported last week that top officials are obsessively monitoring gas prices.

To boost his image, on Wednesday the president will unveil a deficit reduction package. It is meant to counter the plan House Budget Committee Chairman Paul Ryan, R-Wis., put forward.

But he'll have his work cut out. By 47%-26%, Americans give him failing grades for how he handled the federal budget. Among independents: 53%-20%.

(Americans responding after Friday night's 2011 spending deal were more negative regarding Obama on the budget than those polled before, though the difference was slight.)

Just 30% think the country is headed in the right direction vs. 69% who say it's headed the wrong way, including 71% of independents.

Optimism is low, with a plurality, 42%, fearing the economy will get worse in the next 6 months. A third see no change, while only 21% expect things to get better. By 64%-33%, people are dissatisfied with current federal economic policies. Independents were slightly more negative in both cases.

A majority, 56%, of Americans polled said that the stress on their finances hasn't abated and 34% say it has worsened. Only 10% say the stress level has eased. The figures were almost the same for independents.

The Libyan intervention isn't helping his situation either. The poll found that by a 41%-34% margin, voters gave him poor grades for handling the crisis.

Interestingly, that military action was supported by 58% of Democrats even though 72% of Democrats said it was important to get a congressional resolution before intervening. Obama never bothered to get one.