You would think a leader whose "gutsy" decision to take out the evil mastermind behind 9/11 would be getting high-fives all around — and from men in particular. But not according to the latest IBD/TIPP Poll.

In fact, men are one of the few demographic groups whose opinion of President Obama is lower today than a month ago, before the Navy SEALs' successful raid on Osama bin Laden's Pakistan compound May 2.

An index above 50 reflects a positive opinion, below 50 is negative.

The lower index for male respondents is also markedly different from the 6.7-point, or 13.6%, bounce to 55.9 that Obama got from women in the May poll. The divergence opened the gender gap between male and female opinions of Obama back up to nearly 13 points, the widest reading since early last year (see chart above). 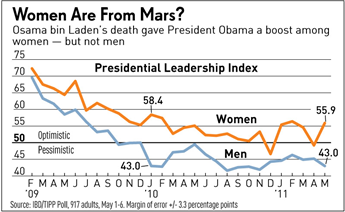 Of the 24 demographic groups tracked by IBD/TIPP, 18 rated the president higher this month than last. Exceptions other than men included Southerners, down 1.2 points to 44.9; investors, down 1.0 to 47.6; and high school graduates, off 2.0 to 43.4.

The gender gap in the Presidential Leadership index partly reflects the fact that more women than men identify with Democrats. According to a 2008 exit poll, for example, men split 49% for Obama, 48% for McCain, and women split 56% for Obama and 43% for McCain.

But another result in the latest IBD/TIPP Poll could explain why men are sitting out the celebration over bin Laden's demise.

Many statistics show men have paid the highest toll in the latest downturn. Their unemployment rate is 9.4% vs. 8.4% for women, and as of February, men had suffered two-thirds of recession-related job losses.