Deprecated: implode(): Passing glue string after array is deprecated. Swap the parameters in /home/customer/www/old.tipponline.com/public_html/libraries/gantry/core/gantry.class.php on line 1044
 Exclusive: Pakistan had to know bin Laden was there, most Americans say 
Deprecated: Function create_function() is deprecated in /home/customer/www/old.tipponline.com/public_html/libraries/gantry/core/gantry.class.php on line 1043

Exclusive: Pakistan had to know bin Laden was there, most Americans say

According to a Christian Science Monitor/TIPP poll, 72 percent of Americans agree that 'Pakistan knew all along' where bin Laden was hiding. Less than a third favor declaring 'mission accomplished' in Afghanistan.

Americans don't believe for one minute that Osama bin Laden could have been living in stand-out compound in a military town in Pakistan without the government knowing about it.

At the same time, following Mr. bin Laden's death, nearly half of them say the US should "stay on course" in Afghanistan and prevent it from again becoming a base for international terrorist operations. Less than a third of Americans say the demise of Al Qaeda's leader is reason enough to declare "mission accomplished" and accelerate America's exit.

Those are among the findings of a Christian Science Monitor/TIPP poll conducted over three days following the announcement of bin Laden's death late Sunday. The poll, released the same day President Obama traveled to New York to lay a wreath at the World Trade Center site – emblem of the terrorist chief's heinous acts – registered a significant boost in perceptions of Mr. Obama as a leader.

The poll found a seven percent jump in Americans who consider the president to be a "strong" or "very strong" leader compared with last month – from 32 percent (April 11) to 39 percent.

On the other hand, the poll registered only a small increase, 2 percent, in Obama's over-all job approval rating – a finding that contrasts with the much larger bump the president enjoyed in a New York Times/CBS poll also released Thursday. The Monitor poll's margin of error was 4.6 percent.
'Pakistan knew all along'

According to the poll, 72 percent of Americans agree with the statement that "Pakistan knew all along" where bin Laden was hiding. Only 14 percent disagreed, while 13 percent were not sure.

The American public's skepticism about Pakistan is hardly surprising, given the heavy media focus placed on bin Laden's compound – and details like its location near an Army garrison and the particulars of its elaborate construction – since Obama announced the secret operation into Pakistan Sunday night. 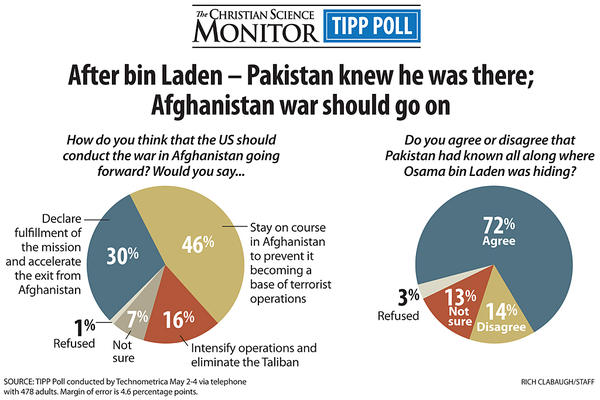 The public's perceptions of Pakistan also reflect the views of a number of US intelligence officials – carried in the US media though generally anonymously – that at a minimum some elements of the Pakistani intelligence apparatus must have known of bin Laden's refuge not far from the capital of Islamabad.

The public's doubts about Pakistan as a partner in the battle with Islamist extremism and in the war in Afghanistan are likely to register in Congress, in which a debate is intensifying over whether the US should use the bin Laden events to pressure Pakistan for more cooperation – or to cut back on relations and reduce financial assistance running into around $2 billion annually.

As for Afghanistan, public opinion is also likely to play a role in this nascent political season in the debate over the size and tempo of the drawdown of troops Obama has pledged to begin in July.
'Intensify operations' in Afghanistan

The Monitor poll finds that 46 percent of Americans want the US to maintain the objective of preventing Afghanistan from becoming once again the base for terrorists that it was under Taliban rule. Indeed, another 16 percent say the US should "intensify operations" with the goal of eliminating the Taliban.

That approach is more popular among self-identified Republicans – about a quarter endorse intensifying the war – while the "declare victory and go home" solution is most popular among Democrats and independents.

As for Obama's handling of the Afghanistan war, slightly more Americans (36 percent) believe the president is doing a good or excellent job than those (28 percent) who say he is doing a poor or unacceptable job.