Deprecated: implode(): Passing glue string after array is deprecated. Swap the parameters in /home/customer/www/old.tipponline.com/public_html/libraries/gantry/core/gantry.class.php on line 1044
 Strong Support For All Bush's Tax Cuts 
Deprecated: Function create_function() is deprecated in /home/customer/www/old.tipponline.com/public_html/libraries/gantry/core/gantry.class.php on line 1043

Fiscal Policy: Listening to the White House and Congress, you'd think Americans were keen to let the Bush-era tax cuts expire at the end of this year. Now, a new IBD/TIPP poll definitively lays that myth to rest.

In a poll last week of 922 adults, we asked Americans across the country a series of questions about the soon-to-expire 2001 and 2003 tax cuts, widely credited with bringing the U.S. economy out of its funk after the 1999-2000 stock market crash, the 2001 recession and the 9/11 attacks.

The results offer a powerful repudiation of those who believe there's a large bloc of envious voters out there just itching to see taxes rise for everyone — especially the rich. 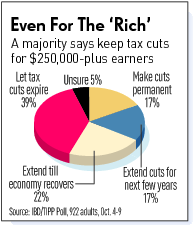 Taken together, 78% of all those queried said they would like the soon-to-expire tax cuts to be extended for households under $250,000 in income, either permanently, for a few years or until the economy fully recovers.

Just 16% want the tax cuts to end — which is less even than the 20% who would make the Bush tax cuts permanent.

In short, there's virtually no constituency for raising taxes on the middle class — but a quite large one for keeping rates low.

Even Democrats see the virtue in keeping economy-boosting tax cuts in place: 14% of Democrats want the cuts made permanent, 30% want them extended "for the next few years," and 29% want them kept until "the economy recovers fully."

How about letting tax cuts expire for the rich, as President Obama and many Democrats in Congress want? A solid majority (56%) said they wanted tax cuts extended even for households with more than $250,000 in income and individuals with more than $200,000. Only 39% wanted the rich to pay more.

Not surprisingly, Democrats oppose this by 55%. But support for letting the tax cuts be made permanent for the rich is overwhelming for Republicans and Independents, both at 63%.

Given all this, the Democratic leadership's ploy to adjourn Congress a week early without addressing tax cuts may misfire badly.

On this issue, average citizens of all parties show common sense — something our government and academic elites seem to lack.

Most Americans know a sick economy doesn't heal when taxes rise or when government tries to spend its way to prosperity. Those who don't get it could be in for a long night on Nov. 2.