Consumer confidence rose to an eight-month high in January, but home prices weakened toward the end of last year, according to separate reports Tuesday, bolstering views that the Federal Reserve will maintain its aggressive monetary stimulus policies.

The Conference Board's sentiment index climbed 7.3 points this month to 60.6 as the jobs outlook improved. Wall Street had expected a much smaller rise to 53.5.

That report follows a 13.3% surge in the IBD/TIPP Economic Optimism Index to its first positive reading since September 2009.

Meanwhile, the S&P/Case-Shiller index of home prices in 20 cities sank 1.6% in November vs. a year earlier, the biggest drop since December 2009. Prices fell 0.5% from October, the fifth straight seasonally adjusted decline.

Yet a growing sense that the overall economy is improving and creating jobs has helped perk up consumer spending, which accounts for about 70% of the economy. But still-high unemployment and declining home values will likely temper enthusiasm and activity.

"We expected all along that this is going to be a very gradual (economic) recovery, and that's still on track," said Scott Brown, chief economist at Raymond James.

The Fed, which began its two-day policy meeting Tuesday, is expected to continue its $600 billion Treasury buying program and keep interest rates near zero.

"They will stick to the picture that they gave us after the last meeting, which is that there are signs the economy has strengthened, but those signs are not vigorous enough to make them want to change their present course," said Nigel Gault, U.S. research director at IHS Global Insight. 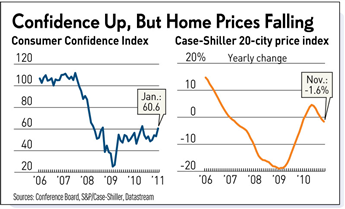 The Consumer Confidence Index remains well below pre-recession levels. But the present situation gauge jumped to its highest level since November 2008. The expectations measure also shot up.

"The longer that we stay out of a recession, and as we trim the jobless rate, I believe that consumers are going to feel increasingly better," Coach CEO Lew Frankfort told IBD after the maker of upscale handbags beat holiday-quarter estimates.

Rising stocks — fueled in part by the Fed's QE2 program — have in turn fueled consumer spending, especially for luxury goods.

Treasury yields fell sharply after the White House said President Obama planned to urge a five-year freeze on nonsecurity discretionary spending during his State of the Union speech Tuesday night.

Stocks, which had sold off on disappointing corporate earnings, erased losses by the close.

The share of Americans who said jobs were plentiful rose in January to the highest since May 2009.

The government is expected to report Friday that the economy grew at a 3.7% annual rate in Q4, up from the 2.6% pace in Q3.

Gains in consumer and business spending, manufacturing output and exports have helped power the recovery. But weak demand and a glut of foreclosures have kept homebuilding depressed and put further pressure on prices.

"If the job market really is picking up, then ultimately that will also pull housing up," Gault said.

Employers have added jobs for three straight months, but the pace of hiring has been too slow to quickly reduce the jobless rate, which stands at 9.4%.