Consumer confidence plunged in early March amid soaring energy prices to the lowest since October 2008, according to the IBD/TIPP Economic Optimism Index released Tuesday.

"It's all driven by fear of events that are beyond our control," said Raghavan Mayur, president of TIPP, a unit of TechnoMetrica Market Intelligence, IBD's polling partner. Still, "I don't think this is a signal for another recession" unless oil prices keep rising.

Higher oil prices filter down to a wide range of consumer goods such as food, gasoline and air travel, Mayur said, adding that consumers are already feeling the pinch from high unemployment.

"There are still 23% of households that have at least one person looking for full-time employment," he said.

U.S. crude fell 42 cents on Tuesday to $105.02 a barrel, but remains near 2 1/2-year highs amid ongoing and potential turmoil in the Mideast and North Africa. 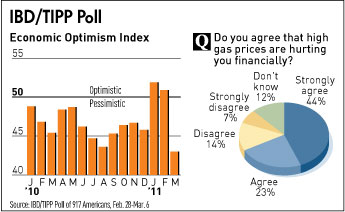 Gasoline prices have jumped an average of 39 cents to $3.509 per gallon since Libya's protests began in mid-February, according to AAA, Wright Express and the Oil Price Information Service .

Two-thirds of respondents to the IBD/TIPP poll said that rising pump prices are hurting them financially, with 44% strongly agreeing. In all, 71% of those polled expect gas prices to top $4 a gallon in the next three months, with 24% predicting $5 or more.

The National Federation of Independent Business' small-business optimism index rose 0.4 point to 94.5 in February, before much of the recent spike in energy costs. Hiring and hiring plans improved, but just 9% net of small-business owners think the economy is improving.

The gauge of confidence in federal economic policies fell 4.5 points to 39. Separately, the IBD/TIPP Presidential Leadership Index fell 1.8 points from a nine-month high to 49.8.