Deprecated: implode(): Passing glue string after array is deprecated. Swap the parameters in /home/customer/www/old.tipponline.com/public_html/libraries/gantry/core/gantry.class.php on line 1044
 Confidence Crashes Through Lows Set In 2008 Meltdown 
Deprecated: Function create_function() is deprecated in /home/customer/www/old.tipponline.com/public_html/libraries/gantry/core/gantry.class.php on line 1043

The economy has weakened dramatically in recent weeks and may have slipped back into recession, data from a new IBD/TIPP Poll suggest.

The IBD/TIPP Economic Optimism Index — usually a precursor to confidence gauges released later in the month — has plunged 13.5% to 35.8 with subcomponents off sharply.

These include readings on six-month outlook, personal finances and faith in federal policies. A reading above 50 signals optimism, below 50 pessimism.

The main index's 35.8 reading was the lowest since the poll began in 2001. It took out even the low of 37.4 set during the summer of 2008, when the financial crisis exploded into the nation's headlines.

It also stands well below the 44.4 level that marked the onset of the last recession. Since the start of this year, the index has cratered 31%.

"The weak confidence data strongly suggest that the economy has fallen into recession, driven by continued high unemployment, under-employment and low confidence in the government's ability to improve the economy," said Raghavan Mayur, president of TIPP, a unit of TechnoMetrica Market Intelligence, IBD's polling partner.

Of the three subindexes, the one that measures how Americans view the economy's prospects over the next six months basically crashed, dropping 20.2% from 39.7 to 31.7.

The new reading undercuts the 32.1 reading of December 2007, the first month of the last recession.

Those surveyed also grew more pessimistic about their own finances. That subindex dropped 8.6% from 51.2 to 46.8.

Politicians looking for a silver lining in IBD/TIPP's monthly survey won't find one in the index that measures confidence in federal economic policies. It skidded 13.8% in August to 28.8 — an all-time low.

The poll of 921 adults began last Sunday and ended Thursday night — during the marathon budget-ceiling debate. It has a margin of error of plus or minus 3.3 percentage points.

Closer examination of the numbers shows deep problems for the Democrats in charge of the White House and the Senate. Most alarming, perhaps, were the findings about unemployment.

Nearly three in 10 (29%) of U.S. households reported having someone unemployed, the highest level ever and a big jump from 24% in July. That 29% figure translates to more than 30 million Americans seeking full-time jobs. 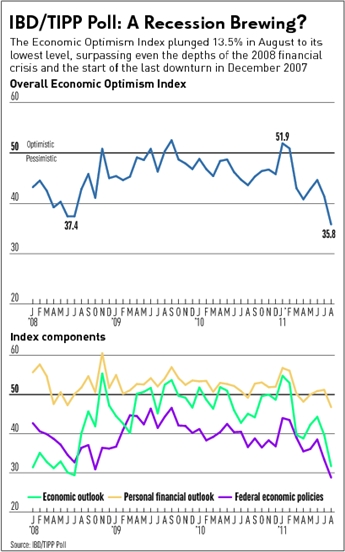 These numbers appear to conflict with Labor Department data showing modest job-market improvement in June. Figures released Friday show unemployment dropping from 9.2% in June to 9.1% in July, and an estimated 117,000 new payroll jobs.

Politicians should also note that the data broadly suggest Americans are angry with the direction of the nation, the economy and federal policies.

If leaders in Washington were hoping to get a bounce in optimism for passing their new debt-ceiling agreement, which makes $2.7 trillion in unspecified cuts over the next 10 years from a budget that's expected to be as much as $10 trillion in the red, they'll be sorely disappointed.

In the past, strongly positive readings among Democratic respondents to the IBD/TIPP Poll have kept the index from falling sharply in recent months, even as the economy soured and the nation's problem with its soaring debt became an issue to average Americans.

But that ended in August.

For the first time since President Obama was elected in November 2008, Democrats grew pessimistic about the economy, with their optimism dropping 17% from 54.7 to 45.3.

Republicans, perhaps modestly cheered by their congressional representatives' refusal to agree to tax hikes in their budget-ceiling deal, edged down just 3% from 27.8 to 26.9.

Independents, a key swing group in elections and a major source of votes for both President Obama and the Democratic Congress elected in 2008, were also much more pessimistic in the month.

As if that weren't bad enough, IBD/TIPP's proprietary Financial Stress Index rose sharply. Unlike the other IBD/TIPP indexes, the higher this one goes, the more financially troubled Americans are.

Even college-educated respondents, whose official unemployment rate is below 5%, are showing severe stress. Among this key demographic, the Financial Stress Index jumped 9.5% from 58.8 in July to August's reading of 64.4.

Why the sudden downturn?

Certainly, the continued high unemployment rate — and even higher hidden unemployment rate in the double digits of those with part-time jobs who want to work full time, or those who are no longer even looking — is weighing on Americans' confidence.

The spectacle of the two major parties engaged in a months-long shouting match over a 10-year deficit-reduction plan that still doesn't solve our nation's fiscal problems no doubt has also hurt.

As reported Friday, 64% of poll respondents have a lower opinion of Congress as a result of its handling of the debt-ceiling issue vs. 8% who have a more favorable opinion.

President Obama came out a little better, with 49% having a less favorable opinion of him due to his role in the debt negotiations vs. 18% who are more impressed.

Obama's overall ratings held up relatively well in the August poll. The IBD/TIPP Presidential Leadership Index came in at 45.1, down only slightly from 45.4 in July, and even ticked up a half-point in a "leadership" subindex.

He continues to poll well among demographic groups including people in their 20s, women, blacks and Hispanics. And his ratings among Republicans and Independents, though still low, actually improved a few points.

But underneath the surface, there is reason for the president to worry.

Economic optimism among Democrats, for example, tumbled 17% to 45.3 — the first pessimistic reading among members of his own party since Obama took office and down 41% since January. Similarly, Democrats' satisfaction of federal economic policies fell 21% to 41.7.

Most stunning of all was a 38% dive to 31.1% among Democrats in a gauge that measures opinion about the country's overall direction. That contributed heavily to a 28% drop to 22.8 in the IBD/TIPP Direction of the Country Index. The previous low was 17.0 set during the middle of the financial meltdown in October 2008.