Americans shopping for a new car are slamming on the brakes, as higher gasoline prices ravaged demand this month, according to TechnoMetrica's Auto Demand survey.

March's reading sank to 49 from February's 94. January's 105 was the best since September 2007. The 3-month average fell to 83. The spike in gas prices has weakened the confidence needed to buy a new car, said Raghavan Mayur, president of TechnoMetrica Market Intelligence.

"The biggest vulnerability of the auto industry is gas prices," he said. "When gas prices increase, the consumer decides to put off auto purchases."

The share who said they are likely to buy or lease a new vehicle in the next six months was halved to 8% in March. 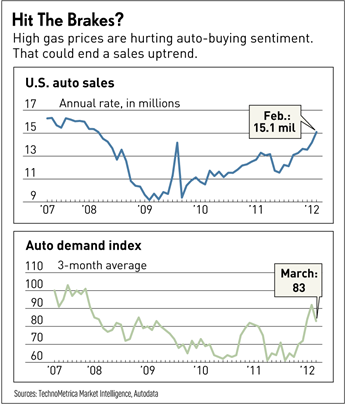 But March's reading suggests that may be ending. Estimates for March sales suggest that momentum could be slowing.

J.D. Power and LMC Automotive project annualized sales of 14.1 million units, up 6% vs. a year earlier but down from February.

"Overall share of small cars in 2012 is expected to climb to its highest level ever, at nearly 20% of total light-vehicle sales," said Schuster.

But while efficient gas-engine compacts like GM's (GM) Chevy Cruze have boomed, GM has suspended production of its plug-in hybrid Volt due to low demand.

In fact, sales of cars using some type of electric power have been weak except for Toyota's (TM) Prius, which widened its share of the hybrid market to 60% last month.

TechnoMetrica's survey shows demand is continuing to rise for compact vehicles, but dropping for mid- and full-sized cars. Demand for pickups and SUVs is up slightly too, despite their inferior fuel efficiency vs. compacts.

But the employment picture is picking up as payrolls have risen by more than 200,000 in the last three months. The additional paychecks and increased confidence that job holders will stay employed could prop up demand for big-ticket items like cars.

Still, gas prices remain unpredictable, and persistent high prices could reverse a positive economic trend as they did at this time a year ago.

More than 50% of Americans expect gas prices will top $4.50 a gallon over three months, TechnoMetrica polls show. Nearly a third see them topping $5.

A PowerPoint Report is availabe here