When the space shuttle Atlantis lands Thursday, the U.S. will be without a way to get into space for the first time since Dwight Eisenhower was president. And Americans are unhappy about that, according to a new IBD/TIPP Poll.

The poll, which asked several questions about America's role in space exploration, found that 56% oppose ending the space shuttle program. That sentiment was shared almost equally among Democrats, Republicans and Independents.

As a result of the shuttle shutdown, the U.S. will have to buy space — at about $65 million per seat — on Russian Soyuz capsules to reach the International Space Station until a new vehicle is designed and built.

The poll also found that 78% feel it's either very or somewhat important for the U.S. to maintain its leadership in space exploration. That finding comes as China, still far behind the U.S., has embarked on an ambitious space program. This year, the Chinese will launch the first piece of a planned space station, and the country says it aims to land a man on the moon in roughly 10 years.

In April 2010, President Obama announced that he was scrapping NASA's planned return to the moon, after the agency had spent $10 billion on the project. That came as part of Obama's overhaul of the agency, which included a goal of reaching Mars in 20 years and relying on private companies to build and operate transportation to and from the ISS.

A number of private firms are working on systems to deliver passengers into Earth orbit.

Obama's announcement created a rift among space enthusiasts, including the first two men to walk on the moon. Buzz Aldrin praised Obama's plan, calling it "a bold new direction for our civil space program." But fellow Apollo 11 astronaut Neil Armstrong blasted it, saying "it destines our nation to become one of second- or even third-rate stature."

In any case, Obama still has plenty of selling to do with the public. Our poll found that 72% don't think he has a clear plan for space exploration. More than half (58%) of his fellow Democrats felt that way, as did 75% of independents. 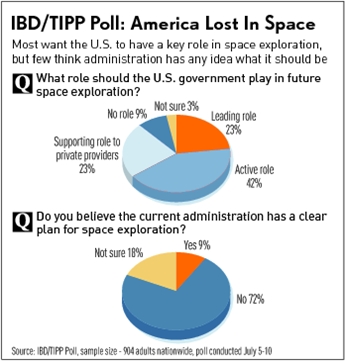 The poll also found that the public is not enthusiastic about spending more money on space programs. Just 10% say the country should spend more, while 49% want to keep NASA's budget at current levels. Meanwhile, 28% want to cut its budget and 8% want to scrap the space program altogether.

For years, NASA's budget has hovered around $18 billion a year, after adjusting for inflation — or roughly half the annual spending during NASA's heyday.

Other findings from the IBD/TIPP Poll:

• Fifty-two percent say the space program is worth the cost for the benefits it's brought.

• Fifty-nine percent say the U.S. could get into space faster, better and more effectively if "we get the space program out of Washington and cut out the bureaucracy."

• Just 23% say the U.S. government should play a leading role in future space exploration, while an equal number say it should play only a supporting role.