Deprecated: implode(): Passing glue string after array is deprecated. Swap the parameters in /home/customer/www/old.tipponline.com/public_html/libraries/gantry/core/gantry.class.php on line 1044
 The Law Is For Presidents Too 
Deprecated: Function create_function() is deprecated in /home/customer/www/old.tipponline.com/public_html/libraries/gantry/core/gantry.class.php on line 1043

The Law Is For Presidents Too

Checks And Balances: A federal judge has told the government it can't implement ObamaCare because it's unconstitutional. Has the White House complied? No, it's knowingly breaking the law.

No, he didn't order an injunction to shut down enforcement of the law as the plaintiffs had asked. But he did cite a previous case and note that his ruling "is the functional equivalent of an injunction."

As if he anticipated the administration ignoring his opinion, Vinson also wrote he expects the "executive branch" to "adhere to the law as declared by the court."

Given this, can there be any question he was saying the law cannot proceed as a function of government? In clear and certain terms even a non-lawyer could understand, the administration was told to cease and desist. 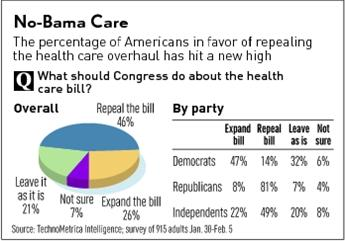 Of course, the White House disputed the ruling and within hours vowed it would "proceed apace" with implementation. Officials decided that their disagreement, as well as their confidence that the ruling will be overturned, were reasons enough to dismiss the order.

The defiance was on display again last week. Testifying before the House Ways and Means Committee, Donald Berwick, administrator of the Centers for Medicare and Medicaid Services, told Rep. Lynn Jenkins, R-Kan., that "I will continue to implement it."

As if to back up Berwick's statements on the Hill, the White House included $465 million for carrying out the Democrats' health care overhaul in the president's $3.7 trillion budget released Monday.

On the same day the budget was delivered to Congress, there were reports that the Centers for Medicare and Medicaid Services are adding nearly 650 employees to work in the Center for Consumer Information and Insurance Oversight. "This office has been entrusted with the responsibility for implementing many major provisions of the historic health reform bill,"its website explains.

The center also has issued hundreds of waivers for businesses and groups that don't want to be forced into ObamaCare, a program that would make the Department of Health and Human Services the first $1 trillion federal agency.

Further defiance of Vinson's ruling is found at the IRS, which is asking for more than 1,000 new auditors and staffers and an additional $359 million to carry out the initial phases of ObamaCare. The IRS says it also needs new facilities.

The White House is fully within its prerogatives to believe Vinson's ruling is an outlier to be overturned. But it can't legitimately keep building the ObamaCare labyrinth just because it doesn't like the ruling. A law-abiding administration would delay implementation until the courts ruled its way.

If in the final ruling the White House is still prohibited from implementing the law, it should return to Congress and humbly try again, this time with the knowledge that at least one part of what had been included before could not be included this time.

But we'll believe that when we see it. This administration has a record of ignoring the rules.

If the White House continues to implement Obama-Care, it needs to be hauled back into court and administration officials should be forced to explain themselves to outraged lawmakers. The executive branch needs to be reminded that the other divisions of government are there to make sure it doesn't become a monarchy.