Deprecated: implode(): Passing glue string after array is deprecated. Swap the parameters in /home/customer/www/old.tipponline.com/public_html/libraries/gantry/core/gantry.class.php on line 1044
 Will A Nuclear Caliphate Rise From Unrest In The Mideast? 
Deprecated: Function create_function() is deprecated in /home/customer/www/old.tipponline.com/public_html/libraries/gantry/core/gantry.class.php on line 1043

Will A Nuclear Caliphate Rise From Unrest In The Mideast?

With the Muslim world reaching a boiling point, U.S. intelligence fears that the unrest could create a power vacuum exploited by al-Qaida and its parent, the radical Muslim Brotherhood.

Both share a goal of bringing the Mideast under a single Islamic ruler, who could control world oil supplies and possibly even nuclear weapons.

The Obama administration finds the idea of such a "caliphate" preposterous. It isn't even concerned about the prospect of Islamist regimes emerging from the revolts. Many of the Mideast protesters are "secular," the White House believes.

Deputy National Security Adviser Denis McDonough called it a "lie" that Muslims want a universal Islamic state. "People across the Arab world are proving the point," he said, by calling for free elections.

Still, 61% of Americans believe the emergence of an Islamic caliphate is "likely" in the next 10 years, according to the latest IBD/TIPP poll, and intelligence officials say the call for a caliphate, while once fringe, has developed over the past few years into a global movement spanning many Muslim countries.

The University of Maryland recently surveyed Muslims in Indonesia, as well as Egypt, Pakistan and Morocco, and found that 77% agree with al-Qaida's quest to "unify all Islamic countries into a single Islamic state."

Experts say the movement is driven in part by growing anti-Western sentiment, but also by a longing for the "golden era" of Islam. At its height, the Muslim empire stretched from Spain in the west to the borders of China in the east.

The Maryland study describes the caliphate as a "collective identity" issue even among Muslims with a nationalistic bent, and a "strong motivator" within the global Muslim community. If so, the Muslim Brotherhood and al-Qaida may have soft fields to plow in Mideast countries ousting secular, pro-Western leaders.

"This issue will continue to overshadow other geopolitical issues," said Doug McLeod, a researcher with the National Consortium for the Study of Terrorism and Responses to Terror at the University of Maryland.

The pious movement traces its roots to the Muslim Brotherhood, a worldwide jihadist group founded in Egypt in 1928. Its bylaws call for Muslims to "fight the tyrants and the enemies of Allah as a prelude to establishing an Islamic state."

Its spiritual leader is Yusuf al-Qaradawi, arguably the most influential Islamic scholar in the region. After 9/11, he issued a fatwah calling for "the spread of Islam until it conquers the entire world and includes both the East and West, marking the beginning of the return of the Islamic caliphate."

After Egyptian President Hosni Mubarak was ousted, al-Qaradawi raised the banner of Islam in a sermon in Cairo's Tahrir Square that drew more than a million followers. 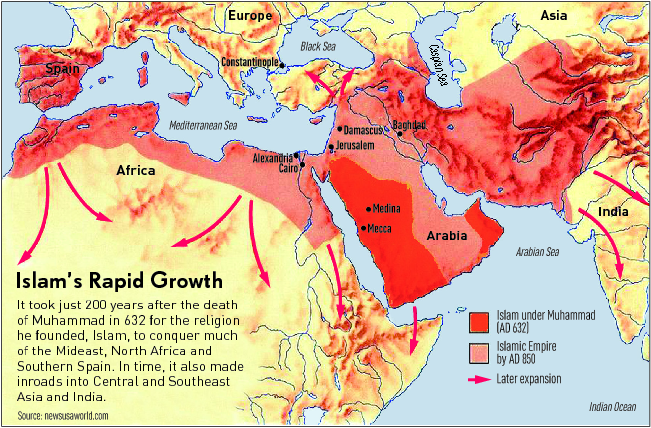 Al-Qaradawi had been calling for "days of rage" before the rioting in Egypt and other Mideast countries, as he did after the Danish Muhammad cartoons were published. U.S. officials now believe he and the Brotherhood orchestrated much of the unrest.

Al-Qaradawi's hand can be seen in uprisings in Yemen, where a close ally has led thousands of protesters in calling for an "Islamic state": in Tunisia, where he's demanded the return of exiled Brotherhood leaders, along with Islamic customs banned by the toppled secular regime; and in Libya, where the cleric has told Muslims it's their religious duty to overthrow President Moammar Gadhafi and to restore the country to its "Islam character."

Banned by Mubarak, the Brotherhood now has a real shot at appearing on an Egyptian ballot and gaining power. The Brotherhood has led post-Mubarak constitutional reforms and backs Mohamed ElBaradei for president. According to a leaked State Department cable, the "ElBaradei for President" Facebook page is run by al-Qaradawi's son.

Meanwhile, Iran has been fomenting unrest in Bahrain and Lebanon. Tehran-supported Hezbollah sped the recent collapse of the U.S.-backed government in Beirut. Now an Islamist regime is taking over there.

Iran's influence is especially troubling given its secret nuclear weapons program. U.S. intelligence worries that unrest in the region could lead to a nuclear arms race. Saudi Arabia, a rival of Iran, has reportedly entered into a secret nuclear pact with Pakistan.

Al-Qaradawi has said that Muslims should acquire nuclear weapons to "terrify" their enemies.

Over the next decade, Harvard professor Niall Ferguson warns, it's far more likely that a caliphate will emerge from the Mideast turmoil than Western-style democracies, posing a direct threat to the West.

"If we find ourselves living next to a restored caliphate in which radical Islam is the ideology not just in Iran but (in) the entire region," Ferguson recently told Britain's Telegraph, "then the world will have changed in a way that is much more threatening to the security of Europeans, including Britain's, than anybody today seems to be taking seriously."

Analysts say that if a caliphate is ever recreated, it more than likely would grow out of the Organization of the Islamic Conference, a 57-nation Muslim bloc that includes Saudi and Iran.

Q: Some say that an Islamic Caliphate -- a unified large Arab nation made up of several smaller countries -- could emerge as a result of the
movement in the Middle East. Generally speaking, in your opinion what is the likelihood of such a possibility in the next ten years?