Deprecated: implode(): Passing glue string after array is deprecated. Swap the parameters in /home/customer/www/old.tipponline.com/public_html/libraries/gantry/core/gantry.class.php on line 1044
 Are We Losing In Libya? 
Deprecated: Function create_function() is deprecated in /home/customer/www/old.tipponline.com/public_html/libraries/gantry/core/gantry.class.php on line 1043

Are We Losing In Libya?

Military: When the U.S. goes to war, it must always be with crystal-clear objectives, plus an ironclad commitment to winning. In Libya, our objectives are muddled while our resolution is in doubt.

When the Pentagon brass and Defense Secretary Robert Gates let President Obama know they opposed his Libyan adventure in multilateralism, Obama sweetened the idea for them by promising that U.S. involvement would be limited.

That says it all, because as a disquieting analysis last Monday by Los Angeles Times reporters David Cloud and Ned Parker put it, "If the alliance's most powerful member isn't willing to escalate, few other members will be eager to do so."

Indeed, prominent members of the British and French governments have publicly opposed what they fear will be a Vietnam-style escalation; France's foreign and defense ministers both made strong statements against deploying ground forces. 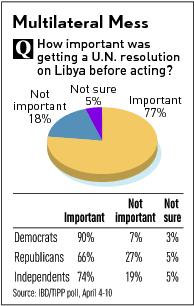 Americans, too, are ambivalent about going it alone. A recent IBD/TIPP Poll shows they think it was important to get U.N. approval for action in Libya (see chart).

So what to do now, with Moammar Gadhafi so uncooperative about losing a war with America?

As in eras gone by, the U.S. is expected to lead; the Euro dawdlers just aren't going to fill any responsibility vacuums we leave for them.

Whether the problem is Hitler or Brezhnev or Ho Chi Minh, history shows that if Superpower America doesn't do the job, the job goes undone. And this is the case even when the threat to other free nations is an existential one, as in the Cold War.

According to David Barno, the former NATO Afghanistan commander, "We rushed into this without a plan" and are now "going in circles." News reports say things like "no one seems certain how to break the stalemate."

Obama's belief that hundreds of U.S. and NATO airstrikes would oust Gadhafi has been exposed as a gross miscalculation. What a vindication for columnist Charles Krauthammer, who warned 2 1/2 years ago that Obama was "a novice with zero experience and the wobbliest one-world instincts."

Yet about 1,000 freelance jihadists are at large in Libya. Links could exist between the Libyan opposition and al-Qaida while the U.S. gives $25 million in "nonlethal" aid to the rebels.

Did someone tell the State Department that Osama bin Laden has gotten into the business of building hospitals and grammar schools?

Surveying the mess in a New York Post article, former U.S. Ambassador to the U.N. John Bolton advises that "we must identify anti-Gadhafi figures who are pro-Western and find ways, overt or covert, to strengthen their hands."